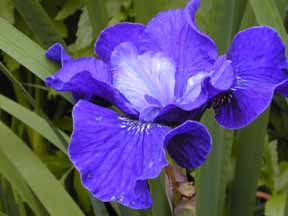 Modern garden Siberians are descended from two species, Iris sanguinea and Iris sibirica. Native to eastern Russia and Asia except–for a westward extension of Iris siberica into central and southern Europe–they usually grow in damp meadows and open woodland. In 1988, a third species, Iris typhifolia or cattail iris–named for its narrow, twisted cattail-like leaves–was added to this group (sub-series Sibiricae).

These species and the hybrids they have generated are hardy, robust plants, probably the most adaptable and easiest of all the irises to grow. They rapidly form clumps of grass-like foliage 2-4 feet tall, bearing erect bloom stalks flowering in May or June.

The flowers of the species forms are generally blue-violet or red-violet, occasionally white, with yellow or white markings on the falls. Hybridization has extended the colour range to include clear white, various yellows, red-violets near red, blues from pale blue to navy, violets and purples, and many bicolours and combinations.

Flower forms in the species are generally described as pendant. The flowers of hybrids have arched, semi-flaring, flaring or overlapped falls; some of them have ruffled or extra falls, and others, especially the newer Japanese hybrids, have six pendant falls, giving them the appearance of the revered hanashobu (Japanese or ensata iris).

The healthiest foliage and best flower production can be achieved by growing them in moist, richly organic, slightly acidic soil. However, they will grow well in ordinary soils as long as it is not too alkaline (the pH should be less than 7.8). Very alkaline soil can be amended by tilling in agricultural sulphur at a rate of 680 grams per 8 square metres. If the soil has a high sand or clay content, large amounts of organic material should be incorporated.

Siberian irises are grown as specimen plants in their own beds or, more commonly, in mixed perennial borders. They thrive when planted along the banks of ponds or streams as long as their crowns (where the leaves and rhizomes meet) are above water. They do not like to grow directly in water but do tolerate brief seasonal flooding. The species form can also be inter-planted with grasses and other perennials to create naturalized gardens and meadows. They are deciduous and may be mown once their foliage turns brown in the fall. Siberian irises prefer full sun but will bloom well with a half-day of sun. In very hot, arid areas they will need some shade, as well as watering and mulching. They like to be constantly moist during spring and early summer when they are growing most actively. Although they will survive summer drought conditions, they will produce more flowers the following year if they can be provided with one inch of water per week during the full growing season.

The best planting time for Siberian irises will depend on climatic conditions. In northern regions, spring planting is recommended to allow the plants to develop a good root system and not be heaved out of the ground by freezing and thawing. In southern regions, fall planting avoids subjecting seedlings and newly-divided plants to hot, dry, early summer conditions. In temperate regions, plants may be divided in either spring or fall, or they may be divided immediately after blooming–with this method, they will not miss a bloom season and the lant will establish early enough to produce good blooms in the following spring.

To plant Siberian iris divisions, scoop out a hole wide enough to spread the roots, 25 cm (10 inches) deep. Place a trowel full of mixed compost and soil in the hole. Mound this mixture on the bottom of the hole and set the iris on top of the mound, spreading the roots down the sides of the mound. Fill the hole so that the crown is approximately 3-5 cm (1-2 inches) below the ground surface level. Water well. If the soil is very dry, fill the hole with water and allow to drain away before putting in the compost mix. If the weather is warm and sunny at the time of planting, invert plastic pots over the plants and leave them there for the first three to five days to prevent wilting and transplant shock. This is a very good practice, especially when setting out tender young seedlings. Unlike the bearded irises, Siberians do not experience a dormant period. When preparing divisions for transplanting, cover them with wet burlap or immerse them in a bucket of water; do not let them dry out.

Well-aged manure or compost may be applied 2 cm (an inch) thick around the plants in the spring and again after the bloom season; alternatively, granular fertilizer containing 10 percent each of nitrogen, phosphorus and potassium (10-10-10) may be applied at the rate of one handful per plant. Some growers prefer to use a formula having extra phosphorus (10-35-10) to stimulate greater flower production. A compost or manure spread has the added benefit of acting as a mulch.

Their hardiness, ease of culture, and beauty of foliage and flowers continue to make Siberian irises a popular plant. For more information, Currier McEwan’s book The Siberian Iris is an excellent reference.

This site uses Akismet to reduce spam. Learn how your comment data is processed.

There are no upcoming events at this time.